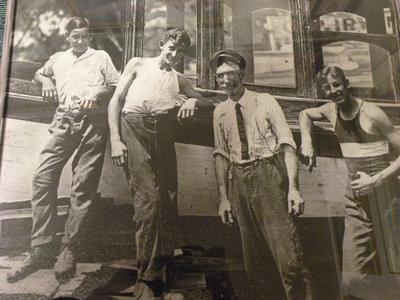 In Legendary Locals of Red Bank (Arcadia, 2014) author Eileen Moon chronicles the lives of a diverse group of men and women who have made Red Bank their home over the past few centuries. Native Americans, immigrants, entrepreneurs, oystermen and ship builders, milliners and seamstresses, farmers and visionaries, entertainers and politicians all converged on the small town of Red Bank, lending their own stories to the river of time here on the banks of the Navesink. In its early years, Red Bank was a place where Sigmund Eisner, a Jewish immigrant from Austria, arrived with empty hands and eventually built a manufacturing empire that served a nation; where a family of watermen founded a boat-building business that continues into its fourth generation; where a young women who failed at her first run for office eventually became the first woman mayor of Red Bank; where a boy whose mother taught him his first piano lessons achieved fame world-wide as the legendary jazz master Count Basie. These are only a few of the legendary locals that author Eileen Moon introduces her readers to in her book, Legendary Locals of Red Bank (Arcadia 2014).
Close ✕

Thank you for subscribing!

You will receive an email (at most once a week) with any new articles.

You can unsubscribe anytime with a link in the footer of the email.